These postings aren't quite in order, but I was waiting for photos. That's right, the rare posting that includes pictures. I put most of these pictures on facebook, but since I can't tell the stories of the pictures, which is my favorite part, on facebook, they now make their debut on the blog. 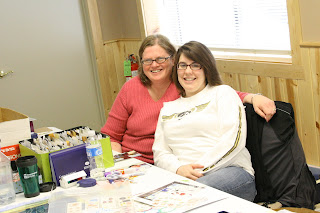 There were two scrapbooking (and quilting and stamping) retreats at camp, and I got to enjoy them both. Donna Jean came up for the first one, and got to see camp (and Fergus Falls) for the first time. We had such a good time. Donna Jean organized three huge boxes of photos, and it was fun to see some classics as she sorted through them.

For the second weekend, my friend, Missy came out and we had a great time. I did not a single ab exercise while I was there, but my stomach muscles were sore nonetheless because of all the laughing. 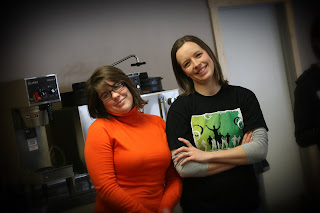 Missy is a ham for the camera. Apparently, I decided giving Sara attitude about taking the picture was the appropriate response. She says she gets this look from me quite often. I find that hard to believe. (Sense the sarcasm.) 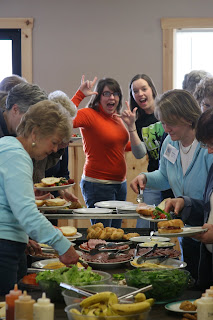 After looking at a bunch of pictures of all of us playing Rock Band at Thanksgiving, it seems that we were in a Rock-Star kind of mood during lunch. We pull it off well, I think. 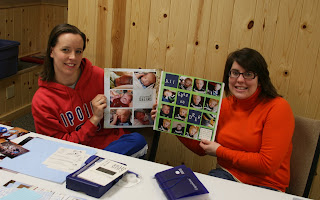 Needless to say, both Missy and I had a lot of pictures of her adorable son, Drew. These are two of the pages we did of him. If your ever around, you should check out this page. Every single one of these pictures of him is absolutely priceless.
The Best Story of the Weekend 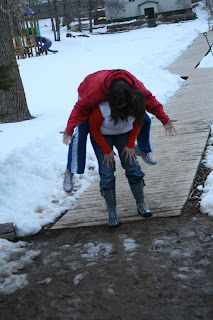 After not venturing out the Lodge the entire weekend, Missy, Sara (another friend and camp photographer) and I wanted to walk up to the chapel to see some other people's work. As is usually the case in Minnesota in mid-march, it was a mud fest at camp. The thaw made the whole peninsula one big mud bath. I, appropriately, packed my wellies (which Minnesotans call galoshes). Missy, however, was not so prepared. Not only was she not prepared, but she was wearing her nearly sparkling white tennis shoes. We got to the end of the boardwalk, and Missy just stared at the mud. I, being the good friend that I am, offered to give her a piggy back ride so as not to muck up her spiffy shoes. Sara walked ahead of us and, camera in hand, decided she would take a picture of the two of us. I prepared myself, and Missy jumped on my back, but her legs made the back up my shirt roll half way up my back. The brisk wind made that a little chilly, so she jumped down and we decided to take a second try at it. There was a miscommunication, or rather, a non-communication, and Missy just jumped on my back. I was not prepared at all, so I fell a little forward, and Missy almost went face first into the mud over my head. I think this picture was taken at a moment when we had stabilized, but I was laughing to hard to move at all and Missy seems to be saying "What are we going to do next?" The phrase "laugh-so-hard-you-pee-your-pants" ended up being true for one of us, but I won't tell you which one. Save face.
at 11:40 AM

Oh fun! Gotta love those scrappin' days...can't wait for the next one! Love ya!
-Al