My baby's getting older 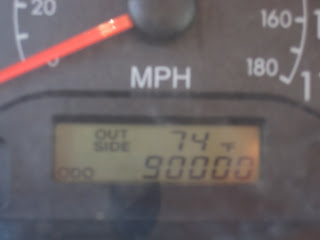 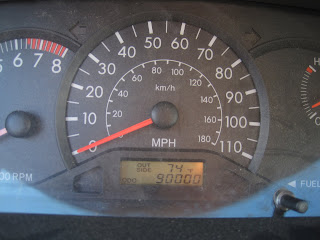 My car turned over 90,000 miles yesterday. NBD, right? Yeah, that's what I thought too. Until it happened. Then I found myself getting kind of sentimental.
Background: I bought this car in January of 2006. It was one year old and had 21,000 miles on it. Not brand new, but as new as a car would be for me. I left DC the following October, and when I left the car had just under 30,000 miles. (Sidenote: Why do I remember these things? I have no idea. Just the way my brain works. Genetic, I think. Grandpa was the same way).
So if you're doing the math, that means that in the nearly four years I've lived in Minnesota, I've put 60,000 miles on my car! And I can promise you that at least 58,000 of those miles were not on exciting roads or ones with any kind of scenery surrounding them. This is just one more reminder to me of how quickly life passes me by. My car still feels new to me. But at 90,000, it's no where near new (in stellar condition, though).
I've decided that this must be how parents feel about their children. I remember getting so mad when I was kid, and I'd see family I hadn't seen in a while. Inevitably, they would exclaim, "Wow! You've gotten big!" And I would think to myself, "What did you think was gonna happen?" (Okay, okay, knowing me, you know that there might have been a time or two that this thought wasn't contained to just my head, but was vocalized. I'll own up to that.) But now I realize that all those adults just didn't realize that so much time had passed that would allow for me to grow up as much as I did. That's how I feel about my good-old Corolla. I understand that it's perfectly reasonable to put 70,000 miles on a car in the span of five years. But it just doesn't feel like that could possibly be the case. I'm nostalgic for the car's younger days, when she was just a baby. If for no other reason, than because it increases her re-sale value.
I'm not too worried about approaching the 100,000 mark. It just means she's a third of the way through her life. :-)

*Also notice that the thermometer above the odometer says 74 degrees. That's right. The end of September at it's 74 degrees.
at 7:20 PM