At long last, here is my New Year's Letter (also known as the didn't-get-it-done-in-time-to-be-a-Christmas-letter).
I’m a sucker for lists. Especially ones that are countdowns or that rank things.
In that spirit, this year’s letter comes in the form of a 2009 Year in Review Highlights

#10 – Not quite 10,000 Leagues…. – For the third year in a row, I played on an intramural co-ed volleyball league on Friday nights with some friends. My biggest contribution to the team was two outstanding recruits, with which we could finally win the championship. Unfortunately, for the third year in a row, we lost in the championship round to the team that has gone undefeated for four years. The league started up again in the fall, and I’m hoping that in the 2010 Year in Review letter, the outcome will be different.
I’m also in a Fantasy Football league, and (hopefully) by the time you read this, I will be the champion. We have twelve teams, and I came into the playoffs with the #2 seed. The final game of the championship is Sunday, and my chances are looking good. Not unlike volleyball, I’ve made it to the championship round in three of my five years, but lost twice.

#9 – Movin’Out – No, I’m not moving from Fergus Falls. In March, after nearly ten years of waiting, I finally got to see the Broadway production of Movin’ Out. It’s a musical inspired by Billy Joel songs. There is no dialogue, and a band sings the songs and uses them to tell the story of the characters. It did not disappoint. The traveling production came to Minneapolis for one weekend, and I did not miss this opportunity to hear some of my all-time favorite Billy Joel tunes.

#8 – Bon Appétit – My love for cooking is still going strong, and quite possibly growing. I’m constantly looking for new recipes and making time to make delicious meals. I bought a Kitchen Aid mixer on Black Friday and took a bread-making class, so now sweet rolls are a new favorite to make. I started a Fiestaware collection last year with place settings, and it continues to grow. I love my dishes. In addition to the mixer, I also expanded my small appliance collection with a waffle iron, George Forman grill (to make kabobs!) and am hoping to get a food processor sometime soon. Any time you’re able, I’d love to have you over.

#7 – Scrappin’ – I’ve been a scrapbooker now for a number of years, but my love for this hobby continues to grow. I’m not very artistic or creative, but this pastime makes me feel like I am. More than that, it’s provided a great opportunity to spend time with friends and family this year. We have scrapbooking retreats in the spring and fall at camp, and I was able to attend a few of them in ’09. Donna Jean (my grandma) came down in March and we spent a fabulous weekend together at camp. She finally got to see where I work and Fergus Falls, and we had a great time. I also have a group of friends in the Fargo area (about 45 minutes from Fergus) that are ardent scrapbookers, and we get together every few months and have a fun weekend. I made a couple books as gifts this year, and discovered my love for the best scrapbooking tool of all time, the Cricut! (No, I don’t have one – just another reason to do this hobby in groups!) 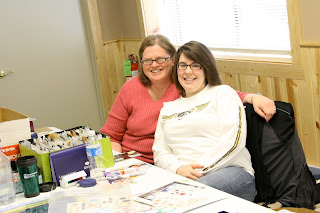 #6 – Sing with me……
“Chicago, Chicago, that toddling town. Chicago, Chicago, I’ll show you around. I love it.”
Both of my college roommates, Lauren and Jessie, live in Chicago, and beings that I hadn’t seen them in four years, I decided I was overdue. I spent an awesome four days in the Windy City with two of my all-time favorite people. We walked around the city one day, went to a comedy improv show, shopped (they have great stores in Chicago!), and I had my first-ever Chicago-style hotdog. Way better than New York hot dogs.  Even if we hadn’t done all those things, this would still rank high on the list because any time with Lauren and Jessie is a blast.
“Hey baby, let’s go to Vegas, kiss the same old life good bye…..”
My best friend, Abbie, has been a teacher in Las Vegas for the last few years, and this year for her older brother (and my good friend), Jeromie’s 30th birthday, we all spent the weekend in Vegas. It was a surprise to Jeromie, and his younger brother and his wife, along with Jeromie’s wife, Missy’s brother and his wife all joined in the festivities. In case you lost count, that was 8 of us and it was a blast. We saw “O”, the Cirque de Soleil water show, ate at Mon ami Gabi, a French bistro across from the Bellagio and went to the Hoover Damn. My favorite part was hiking Red Rock Canyon. It was gorgeous, and I could have stayed there for days. 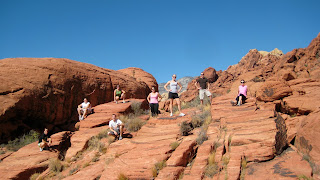 #5 – “As for me and my house, we will serve the Lord.” (Joshua 24:15) – I spend a significant amount of my time serving on the World Mission Team and leading small group of Senior High girls at my church. Both have been huge highlights from the year. As a congregation, we have been working toward the adoption of an unreached people group, the Bagirmi of Chad, Africa, for a few years, and that is what most of my work on the Mission Team has consisted of. In March, Bethel Lutheran Church in Fergus Falls, MN adopted this group. It’s been incredible to be a part of this process, and to think and dream of what God will bring light to this spiritually dark place through our church.
I’ve been working with high school kids for many years now, but this past year has been one of the best. I ended the spring leading a group of 11th grade girls, and started this fall with a group of 9th graders. I absolutely love getting to know them, going to their sporting and other events, spending time each week with them studying God’s Word and talking about life stuff. We do service projects, have sleepovers, and in December, we had a gingerbread house decorating party. The best part of having 9th graders is knowing I get to do this and be with them for three more years! 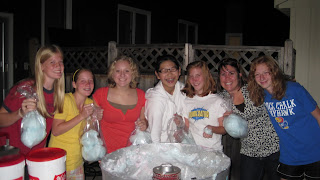 #4 – The University of Iowa. Be remarkable. (For those of you who don’t know, that’s their slogan) – Remarkable is probably the best adjective to describe the 2009 Hawkeye football season, which consumed most of my weekends in the fall. Thanks to DVR (quite possibly the greatest invention ever), I didn’t miss a game this season, and for the first time in four years, I was able to go to a game in Iowa City. My dad got tickets to the Indiana game, and I got up at 3:30 AM the day of the game (that’s dedication!) to see the Hawks come from behind in what had to be one of the best fourth quarters of football in recent memory to go 9-0 for the first time in school history. I love everything about Hawkeye football and am hoping that the #1 event of the 2010 Year in Review Letter is going to Pasadena to watch them in the Rose Bowl. It could happen…… 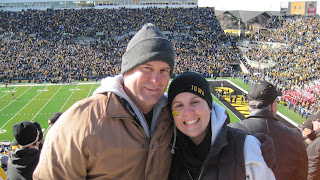 #3 – The only thing that stays the same is everything changes – For the third time in a little over three years, my job responsibilities and title have changed. I am still working at Inspiration Point, a year-round Christian Camp and Retreat Center in Clitherall, MN, and my current title is Executive Assistant and (as of August) Guest Ministries Director. For those of you who follow closely, you’ll realize that the Guest Ministries part is new. One of the facets of our ministry is offering our site and facilities to outside groups who need a place to host their own events. This includes everything from Family Reunions to Church Retreats, to Board Planning Meetings, to quilting groups. Think of an event planner for a hotel or convention center – it’s similar to that. I work with these groups to coordinate their events, and host them when they come to camp. If you’re looking for an ideal place to host your upcoming event, email rentals@ipoint.org (I’m also in charge of marketing )

#2 – Finally, a Bridesmaid! – At the age of 28, after being a personal attendant for many weddings (a fabulous job that I love!), I had the honor of being a bridesmaid for my good friend, Sara’s, wedding. Sara and I became friends when we worked together at camp in 2004, and she has become one of my closest friends. Sara moved to Fergus shortly after I did and is the Media Coordinator at camp. You know it’s a quality friendship when you can spend that much time with someone (and share a 12x12 cabin for 3 months in the summers) and not get sick of them. Sara and Tyler (also an old camp friend) were married on September 19th, and it’s was the perfect day. It was such a blessing to be a part of union that was so clearly ordained by the Lord and a relationship who’s foundation was built on their trust in Him. 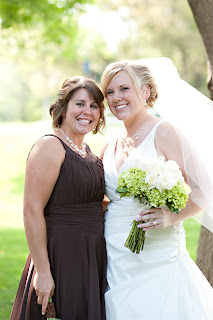 #1 – Soak Up the Sun – For the fourth year in a row, I made the “pilgrimage” to Myrtle Beach, South Carolina. I could have never guessed on my inaugural vacation there that this would become an annual tradition, but I am so thankful that it is. It comes at the perfect time – after a summer at camp when I need a vacation like Whoa! My good friend Amy (from DC), her husband Lee, and their two daughters, Nia & Caty, met me at the airport, and we spent an amazing 8 days laying on the beach, reading books, playing card games, eating delicious seafood, playing in the pool, and relaxing. The words “Myrtle Beach” are now synonymous with the word, “Ahhh..” as even the thought of that place calms me. The best part, of course, is spending time with Amy, Lee and the girls. Amy’s like the big sister I’ve never had, and watching the girls grow up (they were just babies when I moved to DC) is so fun. Now, if only I could see them more often…… in a warm place……. with a good book in hand….. 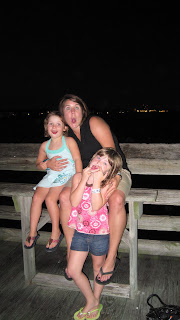 Well, folks, that about sums it up for the year. More than you could ever want to know about my days. God’s richest blessings to each one of you as you begin the New Year. May He bless and keep you, and make His face to shine upon you and be gracious to you. May the Lord turn his face toward you and give you his peace.
at 12:12 AM

For those who know me, you know I can't spell for the life of me, however, I believe you spelled dam wrong. -Kevin Rogness