What?! You didn't know I was going to Las Vegas?! That's because it was a surprise my friend, Jeromie for his 30th birthday, so I couldn't talk about how excited I was to go.
So now that we've been there and returned, he's the low-down on the trip. My best friend, Abbie, lives in Vegas where she's a teacher. Her brother (Jeromie) turns 30 in a couple weeks and his wife (Missy) wanted to do something big to celebrate. So Missy (also a very good friend of mine) planned a surprise weekend in Vegas. She invited Jeromie & Abbie's younger brother, Clayton and his wife, Angela (also good friends - are you catching a trend here?). Missy also invited her brother, Jason, and his wife, Nicole (also good friends). If you're keeping track, that's a total of eight of us. All Jeromie knew was that he was going on a trip for his birthday. He found out the day before that he was going to Vegas, but only found out about the rest of us being a part of it when we showed up and surprised him! It was great and Missy and Abbie did such an awesome job coordinating the whole thing.
I flew from Rochester with Clayton and Angela, and Jason and Nicole had already surprised him. Saturday morning we got up and went to Red Rock Canyon. It was beautiful!! And my favorite part of the weekend. I could have stayed there all day. Did I mention it was 80 degrees and sunny? That certainly helped. :-)

This is me and Abbie at the trailhead. 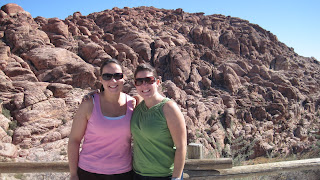 The birthday boy and his incredible wife. 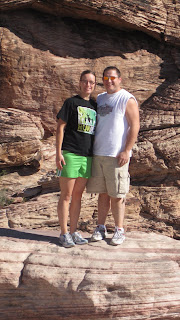 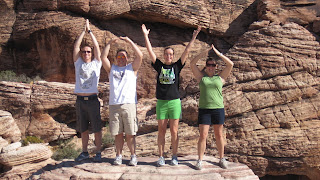 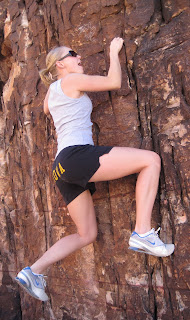 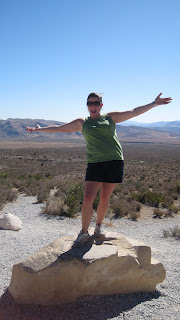 Saturday afternoon we watched the first half of the Iowa game, but had to leave at halftime because we had dinner reservations (we watched the unbelievable ending on Sunday morning). We ate at this amazing french bistro in the Paris casino called Mon Ami Gabi, and sat on the terrace, which was right across the street from the Bellagio fountains. Talk about atmosphere. After dinner, we went to see "O" the Cirque de Soleil show at the Bellagio that incorporates water. It's pretty much two hours of watching people and thinking "how do they do that?!"

Here's all of us waiting for the show to begin 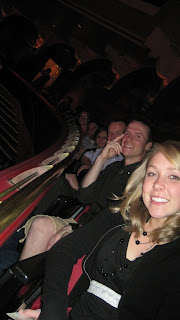 After the show, we hit up a couple casinos. I'm not a real big gambler - it makes me nervous to play for money - but I thought I'd just 'dabble'. I put $1 in a quarter video poker machine, and on my third hand, got a 4-of-a-kind. I played a little more, then hit 4-of-a-kind again. At my highest point, I had $32. I played a little longer, then cashed out at $25. When I went to redeem my winnings, the cashier sarcastically snickered "big money" under his breath as he handed me my 25 bucks. Lay off! How many other people leave Vegas with a 400% return on their money?! I call it a success.

Me and my "big money" winnings voucher 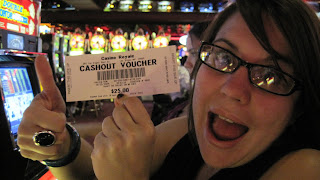 On Sunday, we drove down to the Hoover dam, which was unbelievable. I felt like I kept repeating myself, but at the same time, the only appropriate response to what you see is "Whoaaa...!" It really is something you have to see. The best part was that the three guys were the pansiest ones about height - which we did not expect. By this time, we had decided that we would all share our pictures, so I did not bother with taking any. So I don't have photographic proof, but you should go see it for yourself. It's worth it. And, if you don't, just google it. You'll get the idea.

On Sunday night, we visited Fremont street where it's "old-time" Vegas, then went to New York, New York. We flew out Monday afternoon, after a fabulous lunch at IN-n-Out burger. It was a fast trip, but it was so much fun. Now I'm just trying to get back on a normal sleep schedule. Between going to bed around 3 AM Vegas time, and the two hour time difference, it's been a rough week. But it was worth it.
at 8:50 AM

Loved reading your post! So glad that you had a great time celebrating! Talk to you soon!