The Holiday weekend was so full of events and fun, that it's going to take multiple postings. Here's the first one, including a list of all the attendees, and their relations. Yoy may want to reference it later to really appreciate these stories, I'm sure.

I spent the holiday in Bismarck with families, the Taylors, Jonas' and Cornells.

Taylors:
Ron - Father
Sondy - Mom
Jeromie - Oldest son*
Abbie - Daughter (and my best friend)
Clayton - Youngest son
Angela - Clayton's fiance
This is my surrogate family, and I probably should have put this legend up earlier.
Jonas:
Rod - Father+
Shirley - Mother
Missy - Oldest daughter (and wife to Jeromie Taylor - listed above)*
Jason - Youngest son
Nicole - Jason's fiance
*Jeromie and Missy are parents to Drew, my nephew
Cornells:
Dave - Father+
Amy - Mother
Sara - Oldest daughter and my friend and co-worker
Kaitlyn - Youngest daughter
+Rod and Dave were roommates and basketball teammates in college, and the Jonas and Cornell kids grew up together.
Well, now that we all have that straight, here goes the weekend................
Sara and I took Wednesday off to start the festivities a little early - turns out we were late to the party, because we were the last ones to arrive. Wednesday evening we all played a game called "Celebrity", in which there were three separate occasions when I laughed so hard I cried. They involved Shirley not knowing Kirby Puckett was dead and being pretty broke up about it, Rod thinking that Urkel (of Steve Urkel from Family Matters) sounded like ear, and Abbie ruining the whole game by combining the "to guess" bucket with the "completed" bucket.
Thursday morning started with a carb-full breakfast along with a banana in prep for the 5K that Missy, Angela, and I ran. We were a little nervous about the cold - it was about 25 degrees - but it ended up being fine. We all had a good time, and enjoyed the run. Bonus - we didn't feel even a little guilty about the large amount of food consumed a few hours later. 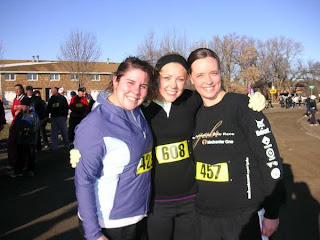 Missy and Angela found these energy beans things that you were supposed to eat during the race that helped endurance. We weren't sure if they worked, but they sure tasted good. 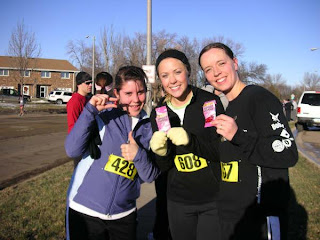 As soon as I get the pictures from Sara, you'll see the feast, and all the fun that follows.

looks like fun to say the least. can't wait for pictures

Kirby Puckett is dead? You're talking about the baseball player right? Who knew!?