Day 8 - Photo that makes me angry/sad

Well, I don't really take a lot of pictures of sad things or things that make me angry. I get angry enough as it is, I don't need photos to get me even more riled up.

But I did think of this photo right away because I scrapbooked this event last weekend and was annoyed at two things.

The guy who took this picture works at Target Field. He's a waiter in the VIP section, which are the 10 rows behind home plate. So I think it's a fair assumption to say he takes a number of these kinds of pictures, and I was excited to find someone like him to do it. 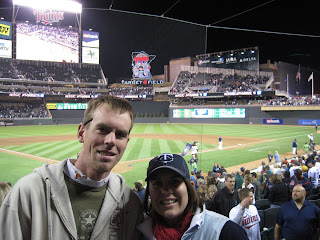 As you can see he barely got our faces in the picture. I'm not sure what he thought was so great about the black sky, but whatever. And with the shadows, you can barely see my face!

When I was scrapbooking the page, my good friend, and professional photographer, Alissa, mentioned that she could edit the photo to lighten my face a little. She worked her magic, and through the magic of the internet, I uploaded the edited photo to Sam's Club, and went to pick it up an hour later. Only to discover that Sam's Club cut off half my face! You can see my face in the new picture, but only the top half of it.

So it's not that the photo itself makes me mad, but seeing it makes me think of situations that make me angry. Is that the same thing?
at 3:52 PM