It's Kristin story-time everybody!

When I moved to Fergus Fall almost three years ago, one of the very first things I did was buy a couch. That's a story for a different day, but suffice it say it was a perfect, match-made-in-heaven couch. And, in typical Kristin-fashion, I got a stellar deal on it, which made it even better. I decided at the time not to purchase the loveseat yet, because they weren't willing to negotiate with me on that as much.
So, for the past two years, I've gone into Slumberland, on average, once a month to see if I can talk them down on the loveseat. My theory is that since the loveseat is about 2/3 of a couch, I will not pay any more than 2/3 of what I paid for the couch. Slumberland has not viewed the sitaution the same way. I went in one day this summer to try my luck again, and the saleslady approached me and asked what she could help me with (I haven't decided if she pretends not to know or if she actually doesn't remember, which seems impossible to me). The couch and loveseat were not in their usual spot, so I asked her where they had moved to. She then proceeded to tell me that the company that makes that furniture went bankrupt and Slumberland was forced to liquidate their inventory, so I wouldn't find it anywhere! NOOOO!!! Now what was I supposed to do? I was devastated.
I decided my next best course of action was to try to find a coordinating loveseat and/or chair that had a similar make to my couch, and thought Craigslist was the best way to do that. So I began searching. Almost right away, I found a listing titled "Slumberland Living Room Set", and when I clicked on it, it was my loveseat! And the matching ottoman! I couldn't believe it. I emailed her to see if she would be willing to sell me just the loveseat and ottoman, as I already had the couch and the end tables were ugly. And she did! For a great price! I couldn't believe it. These are the kinds of things that would cause my grandpa to chuckle, shake his head back and forth and say "These things only happen to you, Kristin Nicole."
Here's a picture of the loveseat in the lady's house. 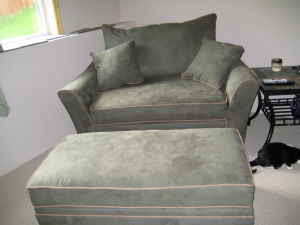 And here's what it looks like in my living room - with it's matching couch. I never even sit on the couch anymore. I just sprawl out on the the "throne" (that's what I've decided to call it), and fall asleep on it more nights than not. 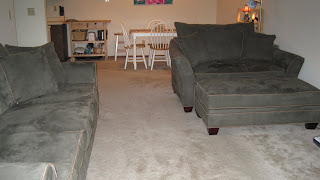 This is the view from my porch/sliding glass doors into the living/dining area. It's a hard angle, so you can't really get the whole idea. Guess you'll just have to come over sometime and see for yourself!

Wow! I thought for sure that since they didn't carry that company anymore that you would end up without a matching loveseat, but I under estimated your determination! I'm glad that the story had a happy ending! I can't believe you found it on Craig's list and it was in such good condition! Way to go!