Blogging is about to change drastically 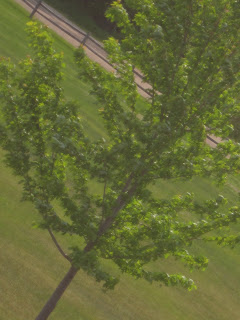 Why is there a random (and semi-fuzzy?) picture of a tree to start off this blog? Totally legitimate question. It's because I finally have a new camera! Ladies and gentlemen, this can only mean one thing; my blogging is about to become much more exciting. Actually, I think it means two things; the second being that I will probably update more often because having pictures adds another whole dynamic.
If I would have had a camera last weekend, I would have done a big (and exhilerating) post on my friend, Clayton's, wedding. But no camera, so just words are not as exciting - and take more time than just putting a bunch of pictures up.
Tonight I'm being super lazy and recovering from the last week and a half which has been CRAZY! Summer Staff Training wrapped up today, and I'm exhausted; not a good way to start the summer, but I'm doing everything I can tonight to get rested up. Tomorrow I'm going to another friend's wedding, and there will most likely be some good pictures that I will be able to share with you all. The rest of the summer, however, might just be pictures of me working at my desk, since that's what 95% of my summer is.

On a completely different, much more sad note, today is the one year anniversary of the day my Grandpa died. I can't believe an entire year of my life has gone on without him. This has been a very hard week and a half; today especially. Tonight I'm going to read some letters I found recently that he wrote me, and watch Butch Cassidy and the Sundance Kid. It was his favorite movie, and now is one of my all time faves as well. I insisted for years that I didn't want to watch it because I didn't think I'd like it. Grandpa was insistent, though, and after a few years of persuasion, I watched and loved it. Now I can pretty much quote it from beginning to end. There are even a few parts that when I watch it, I can hear Grandpa's laugh. He just got such a kick out of it. I miss him so very much, but I'm thankful for little things like Butch Cassidy that bring great joy.
at 7:40 PM

Wahoo! Camera time! I can't wait to read/see all of your new posts!

The first year just always seems so strange after loosing someone so close. I totally know what you feeling. I can still hear my dad's voice and his laugh. And able to think of what he would say at particular moments. We can be so thankful for memories!