Been There - Three Times

I was logging in to check my hotmail, and I see a link to this article: 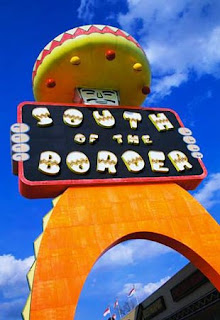 The World's Worst Tourist Traps
South of the Border: This cheap vision of Mexican kitsch can be found off Interstate 95 near Dillon, S.C. There’s an amusement park called Pedroland, named after its mascot who speaks heavily accented and broken English; there’s a giant sombrero on a tower; there’s a garish, psychedelically painted T-shirt shop. Unless you want to stock up on fireworks, keep driving.

The article was a list of the ten worst tourist traps in the world, and I noticed this one right away. Matter of fact, I have many pictures of me and two adorable girls on an array of concrete animals. I believe I also have a picture of Pedro and me, but I'd have to dig in the archives for that one.

It should be noted that on my first of three visits to South of the Border, I waited with 400 high school students and 40 adult chaperones in a half paved/half weeded parking lot of a very shady gas station while one of the 5 charter buses in our caravan was worked on by the group of drivers because it broke down while driving to Myrtle Beach, South Carolina. That was the longest trip of my life, and that story is just one piece of a very eventful trek. Hard to believe that after a first experience like that one that I ever returned.

Okay, so I couldn't find any pictures of me and the girls on the animals, but I did find one of me (trying to) take a nap on a concrete dolphin. It's actually more comfortable than you would guess. 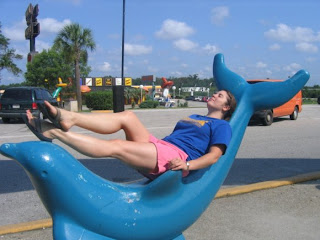 bet you wish you were there right now. i heard about your snow storm. i gotta admit i laughed at your expense.
-krista

I love the dolphin relaxin'... if only the sun would shine like that here!

i think this photo epitomizes the real keeling. love it! can I get an 8 x 10 glossy autographed?